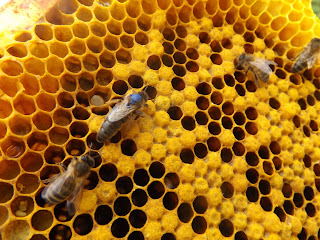 The queen has just been marked with blue paint. Blue represents year 0 or 5. In this case this queen is a 2015 queen. 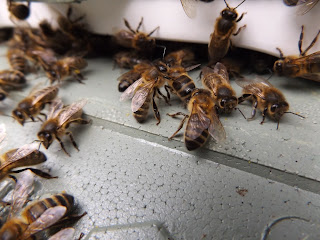 Bees busy at the entrance of one of the hives. 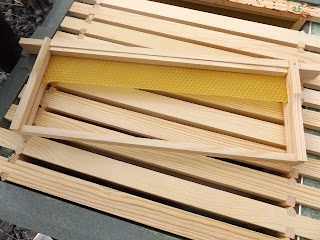 A box of new supers with starter strips in the frame, ready to be put on one of the hives. I use starter strips now in brood and super frames. I feel it is more natural for the bees to draw their own cleaner wax. It is cheaper. It allows allows me to harvest cut comb honey. In the brood nest I feel it is cleaner to regularly replace all the comb. Its allows the bees to draw cells to a more natural smaller cell size and it makes cutting out queen cells much easier. 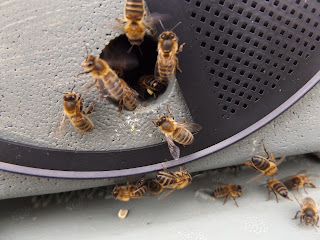 Bees bringing in pollen at one of the poly nuclei. 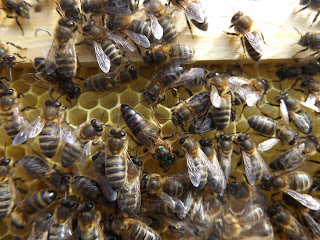 The queen on the frame. She has green paint on her which is partially worn off. Under the green paint is red paint as she is a 2013 queen. I put on extra paint last year while inspecting this hive as the red paint was almost gone. 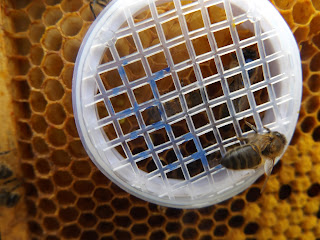 I am not too sure of the proper name for this, but at our bee association we always call it 'the crown of thorns'. A young queen has been found on this frame and I trapped her under the crown of thorns so that I could mark her with paint. I also use this to isolate a queen if I need to move her or if I'm manipulating the hive and I'm worried about crushing the queen. 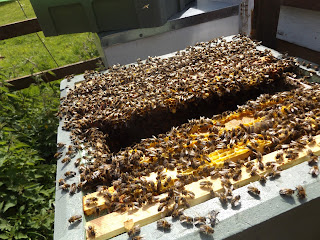 This hive is for honey production. It has twelve frames of brood and two boxes of supers. The number of bees is immense and we hope to get a good honey harvest from this hive. Since we have started to move to poly hives, we have noticed that the queen will lay out to the outside frames, as very little heat is lost and they build up very quickly. I am now phasing out wooden hives in favour of these poly hives.
This hive has drone comb on the corners of the frames and several empty queen cells. I am checking this hive weekly for occupied queen cells, as I expect it to make plans to swarm soon.

Email ThisBlogThis!Share to TwitterShare to FacebookShare to Pinterest
Labels: Bees 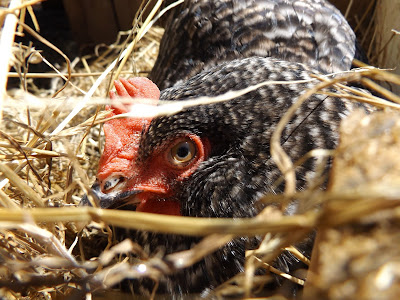 Life is busy on our little farm at the moment!
I am on a few weeks leave from work and it has been great to catch up with the house, the animals and of course the children.

The weather has been very poor for the month of May. It has been cold and wet with poor grass growth. I hope to get a good honey harvest this year so a few weeks of hot temperatures will be necessary.
My attempted queen rearing using grafted larvae was a failure. The bees rejected the grafts by removing the larvae. I have three hives now with hopefully young queens. I will check them today to see if they have started to lay. 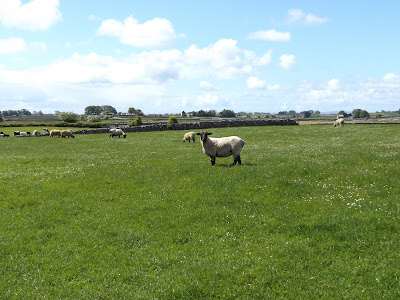 Our elderly wolfhound had a surprise pup two months ago. He is a Irish wolfhound x German shepherd named Fionn. We were quite shocked to discover the pup one morning, as the mum is ten years old and never had a litter previous. 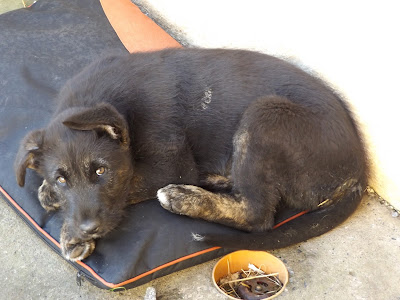 We have our herd test this evening for the cow and calf. The calf is sold and will leave the farm in the next few weeks. 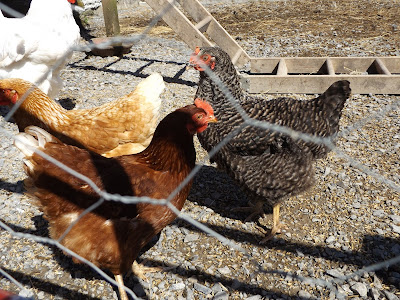 The magpies are stealing the hen eggs from the coop. It infuriates me as all that is let is a mess of broken eggs in the nest box each evening.
I'm keeping them locked in until noon at the moment but when I return to work they will be let out early and I expect we will have no eggs again.

The pigs are doing well. We need to fatten up the two younger pigs and send them to the freezer. When the calf is gone, there will be plenty of milk for the pigs.

Getting ready for the beekeeping season 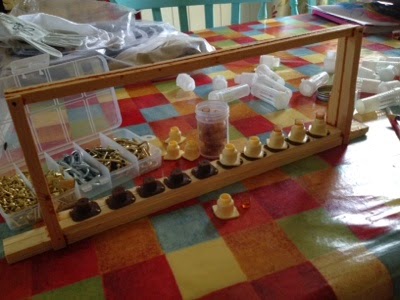 After a quiet bee winter, I always get a little excited about the pending season.
I make plans and goals for the season ahead and try and education myself further about how to go about achieving those goals.
With bees you can never learn enough as there is always more to learn, and books can only teach you so much.
So this year I intend to try queen rearing by grafting. It will take a few years to get comfortable and with good success rates but I will give it a go. 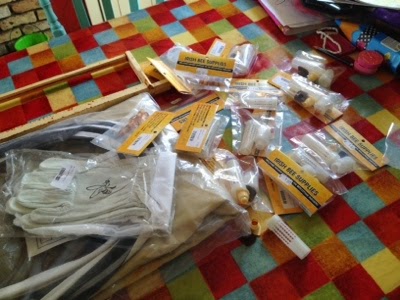 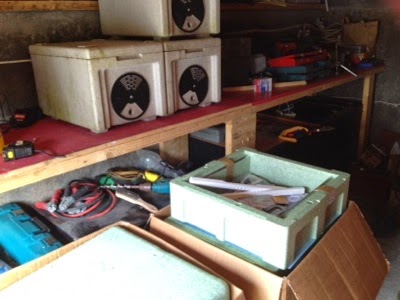 I ordered extra bees supplies this week and made up the grafting frame yesterday and painted three poly nucs. Today I will paint two new poly national hives.
The weather is cool and damp with daytime temperatures at about fourteen degrees. Too cool yet but that is promised to change over the next few weeks.
I have three good hives after the winter. I lost a full strong hive. And when I checked them when there was just a handful of bees left, I found no queen.
She was a new 2014 queen and somehow failed or got lost/died and the hive slowly died out over the winter.
Posted by Marie at 02:31 No comments:

Marie
South Mayo, Ireland
After an illness in our family, we decided to stripe life back to the bare minimum to see what was left. What we found was a value for family life, time generously shared with family and friends, laughter to fill our small cottage...Happiness